Breastfeeding in Southampton - Every Day Counts

The Photos and the Venues

IKEA Southampton
outside lifts, top floor, SO15 1GY
On display until Tuesday Aug 12, 2018

Princess Anne Hospital
reception, SO16 5YA
Some photos still on show.

A selection from the exhibition plus some not in the show

Back to home page

Back to news page 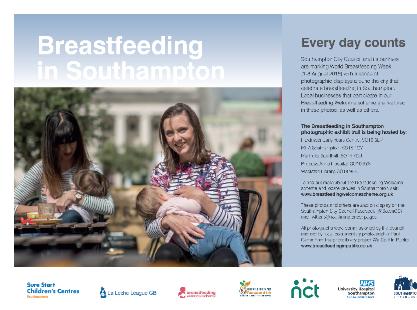 Background to the Exhibition

Earlier this year members of WDIIP were invited by Southampton City Council to contribute to a project to mark WABA / World Breastfeeding Week. Jayne, a midwife and an IBCLC INTERNATIONAL BOARD CERTIFIED LACTATION CONSULTANT, was on the advisory group and Paul was commissioned to work with local breastfeeding women to take a special set of photos showing them breastfeeding their children in locations that would be recognisable to other Southampton women.

The idea behind the project was to fuse art with public health promotion - to produce a set of photos which were beautiful, local and which captured the normality of breastfeeding in public. We hoped that by celebrating breastfeeding in public in iconic City locations, that more local women would be empowered to feel confident and comfortable about breastfeeding while out and about with their children. We see this shift in culture as an important part of a move towards Southampton becoming a more baby-friendly city.

The result of this partnership and two months of concentrated effort by everyone involved was a photographic exhibition titled "Breastfeeding in Southampton - Every Day Counts". The show was spread across five very different locations throughout the city - the IKEA furniture store; Mettricks cafe in the centre of the city; the Princess Anne maternity hospital; and two out of centre locations - the small library in Woolston and the Hardmoor early years centre.

The Volunteers
We needed a group of nursing mothers to photograph. This challenge was easy. All the partner organisations did a callout for volunteers through their social networks. More than sixty mums put their names down and about thirty of them managed to get to at least one of the eighteen photo sessions.

The volunteers who came to the sessions were from a good range of backgrounds and age groups. We had volunteers who were feeding children ranging from new born babies to toddlers 3 years old or more. Some were tandem feeding. However, even with this open way of recruiting we did not manage to find a pool of volunteers that properly reflected the full diversity of Southampton's communities. Several attempts were made to get a better balance, for example in relation to the ethnic diversity of the City. We know that most women in most minority ethnic communities do breastfeed their children.

Unfortunately, in the time frame, we had no success on drawing them into the project but happily the process of trying has started conversations that may both help us be more inclusive in the future, whilst highlighting that for some women in some communities it may seem even more challenging than for others to assert their right to breastfeed their child in a public place, let alone to be part of a public exhibition to celebrate breastfeeding. We hope that the dialogue on both fronts will blossom into something positive in the future.

Thus various venues agreed to help, some part of the scheme and some not - Westquay shopping centre, Casa Brasil, Cosmo, Franco Manca, Bill's, Cafe Momento, Artisan Cafe, Mettricks Guildhall, Civic Centre Library and Woolston Library. We also went to public spaces such as Weston shore and Southampton Common. The Esplanade, the open space next to the old walls, was all set up with a giant screen where Sotonians could sit in a deckchair and watch Wimbledon. This gave the photo sessions there a very holiday feel. There were lots of other places we might have included, but time was against us. 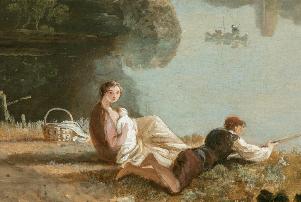 Most of Paul's photos for WDIIP have been taken with a "fly on the wall" approach, with the subjects usually not looking at the camera. During a meeting with Rebecca Moisan of Southampton City Art Gallery early in the planning stage, she mentioned that there was a detail in one of the paintings on display in the Gallery, "Romantic Landscape" by Richard Wilson (1718-72), which included a woman breastfeeding. Paul was inspired by the way the young woman feeding her baby looked at the artist without embarrassment or surprise, regarding what she was doing as very ordinary and day to day. He decided that on this project he would include more photos of the mother's with their eyes to camera. He hoped that the subject confidently looking at us looking at them would make the photos more engaging and reinforce the sense that what was happening was acknowledged and OK. 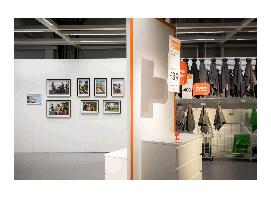 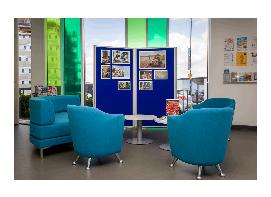 The original idea was that the photos would be displayed in frames to emphasise the art aspect of the project, but as the different venues signed up to show the pictures, it became clear that frames would not work practically or aesthetically in some places. Very simple board mounts were used instead at three venues to make it easier for the photographs to be presented on notice boards etc. This variation allowed the five parts of the exhibition to reach the widest range of audiences.

Although the display times in some venues are quite short (one week), they were extended in others, and afterwards the prints will form an important resource for ongoing breastfeeding support work.

Social Media and Websites
Getting the five parts of the exhibition out into several very different venues has been crucial to introducing the topic of breastfeeding to a wide range of people, but the posts and comments on the council Facebook, Twitter and website pages have extended the reach of the project further, passed on by the volunteers and others via their own social network pages. This page has been seen by visitors in twelve countries so far. The other role the pages play, of course, is to publish the links to more information and to breastfeeding support organisations both local and national.

Some of the volunteers visit the display in IKEA